What we always hear is that digitalization is improving and that many innovative advancements were made this last year. But, what exactly happened in 2019? What are the most talked-about topics this year?

Join us as we go through the 6 most exciting things that happened during 2019.

The world record for the largest container ship was once again broken.The vessel, MSC Gülsün, has a capacity of a whopping 23,756 TEUs and is 399,9 meters long and 61,5 meters wide – making it bigger than the Eiffel Tower. The ship was launched in July 2019. It is a new class of container ship, which is optimized for efficient propulsion and reduced fuel consumption which means there will be lower CO2 emissions.

The current global sulfur cap which bunkers can have in their fuels is 3,5%. The IMO – International Maritime Organization – has set new standards that will further drop the maximum level of allowed sulfur to 0,5%, meaning that from January 2020, all vessels worldwide will only be permitted to utilize bunker fuel containing sulfur levels much lower than the current year’s levels.

3. New Record for Port of Rotterdam

Europe’s largest port located in Rotterdam set a new record for the total throughput volume in 2018.

The number of TEUs processed at the port has increased 5,7% from the previous year, and the new record stood at an annual total of 14.5 million TEUs.

The port authority expects this number to increase further by the end of 2019, however not as much as it did in 2018.

An autonomous Unmanned Surface Vessel (USV) made history by going across the world’s busiest shipping lane existing between the United Kingdom and Belgium. USV’s have been a hot topic for the industry in recent years as the number of stakeholders assuming an active role in the development of these autonomous vessels keeps increasing.

5. The Trade War between the United States and China

The world’s largest exporter and importer, China and the United States have been respectively clashing for most of the year.

So far, the U.S has imposed tariffs on more than $360 billion worth of Chinese goods, while China has imposed tariffs on more than $110 billion of U.S products. The United States has gone through four separate rounds of tariff impositions and has planned to further impose more towards the end of this year, making almost all Chinese goods going to the U.S subject to tariffs. China, on the other hand, has also planned for similar action by the end of the year.

Negotiations, in pursuit of a truce, are currently ongoing although the progress is expected to be slow.

In September 2019 for the first time, a civilian nuclear-powered ship sailed with cargo on a new route – from the coast of Scandinavia to St. Petersburg.

The ship was reported to have delivered close to 204 containers carrying frozen fish, scheduled to go on sale in the European territory of Russia.This ground-breaking achievement has created the possibility to include a new maritime route for ships that could sail through the Arctic regions for their voyages. 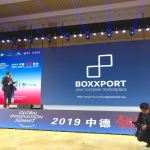 The world has not even recovered from the coronavirus pandemic, yet we found ourselves stuck, or rather a gigantic container ship ran aground got stuck in the Suez Canal on 23rd March 2021. The Ever Given, a Japanese operated by the Taiwanese Company Evergreen Marine, is one of the world’s largest shipping container vessels with […]

We are excited to introduce an added feature on BOXXPORT. Negotiation Management will be active on BOXXPORT from June 1, 2020.Join us, as we take the industry a step higher digitally.Watch The Introductory Video for the Buyers Side Click to Buy/Sell Shipping Containers on the World’s Largest Container Marketplace Take a peek into the Negotiation […]

The Five W’s of Brexit

What exactly is Brexit? Brexit, which comes from the words ‘Britain’ and ‘exit’, is a shorthand way of talking about the United Kingdom’s separation from the European Union. The decision to leave the EU was made when a referendum was held, and the government called the British people to vote. Two options were presented: Remain […]

In today’s arena, the maritime industry is one of the biggest industries in the world. It employs the use of a large number of freight containers with the extensive help of manpower. This makes it quite imperative that the container logistics process must be safe to use. But what makes the maritime containers cargo worthy? […]

Millions of dollars in holiday gifts and other products bought by Americans are stranded aboard massive container ships, waiting for a spot to unload at the ports of Los Angeles and Long Beach. Because of the volume of goods arriving from Asia, some of it has been rerouted to other ports in the nation. It’s […]

The IoT revolution in Logistics and Container Shipping Industry

The invention of the internet has led to the discoveries of various new things that are day by day transforming the entire world. The buzzword IoT (Internet of Things) is one such thing which is taking over old traditional operational activities in freight forwarding and container shipping industry while making each process efficient than earlier. […]

What creates container shortage in the Shipping Industry?

Shipping containers came into existence to solve the decades-long issue of transportation of cargo. There were many categories and dimensions of shipping containers that were specifically designed in order to fulfill the requirements of every type of cargo that was transported worldwide. Whether to buy cargo-worthy shipping containers or wind-and-watertight variants, the decision is yours. […]

A Guide to Shipping Container Maintenance

With repeated usage for the delivery of cargo all over the world including the various means of transportation used, the intermodal shipping containers are subject to succumb to wear and tear. Everyone needs to carry out regular inspections on the shipping units to ensure that they have endurance and can work for years beyond expectations. […]

Why you should buy SOC Containers now!

The shipping container is known to be a major driver of international trade. Because of the important use of this essential asset, differences were made to identify containers based on their use and the holder of the container. Based on regulatory rules, these differences led to the categorization of the container into two broad types […]

What are the essential documents needed for international shipping?

Introduction The invention of shipping containers brought together a whole new era in which the whole world was connected by one single thread. Containerization changed the way in which cargo could reach its destination as now the goods could be stored into containers and then transported from one location to another. For this entire process […]

All you should know about shipping containers

Maritime shipping containers have been around us for ages. But still many of us don’t know much about shipping containers. They are large rectangular boxes that are used to carry different categories of goods from one place to another. You have seen them on rolling trucks, long hauling trains, and huge vessels carrying a huge […]

A shipping container is a box onto which cargo is loaded and transported from one location to another. The shipping container first came into existence a few decades ago. Ever since then, world trade was never the same. The task of loading and unloading goods from one cargo box to another was eliminated, making the whole […]

Everything you needed to know about Shipping Container Floors

Introduction Shipping containers undergo harsh weather conditions while transportation such as scorching summers, incessant rains, chilly winter storms, and whatnot. Thus, sturdiness is the most important prerequisite for the shipping container designs and floor plans so that it can withstand any kind of stress it is subjected to. It should be such that hauling across […]

Container Types- A guide to side door containers

All you need to know about Intermodal Containers

Entering the world of logistics and shipping, one could be bewildered by different incoterms used by the industry personnel. ‘Intermodal container‘ is one such term that is much in the use in the shipping industry. Different people have a different definition for intermodal containers- some say it’s a synonym used for shipping boxes while some […]

Platform containers come to your rescue when you have heavy cargo to be transported that cannot be shipped in any other container type. The shipping container industry has grown exponentially in the last few decades. This means of transportation of cargo plays a very crucial role in our lives. Yet, due to the fact that […]

Leave a comment Cancel
Comments to: Highlights of the 2019 Maritime Industry

Welcome to Typer
Brief and amiable onboarding is the first thing a new user sees in the theme.
Read Smart, Save Time
Pick all the topics you are interested in to fill your homepage with stories you'll love.
AI